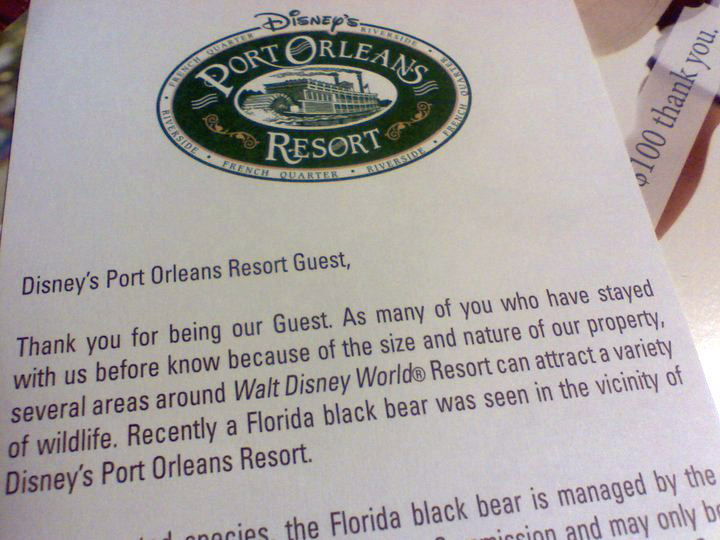 I guess it’s not really uncommon to expect that you might encounter a lot of bears while you’re on vacation at Disney World.

You’ve got Fozzie Bear, everybody’s favorite comedian from The Muppets.

You’ve got Winnie the Pooh, that chubby little cubby all stuffed with fluff.

You’ve got all of those singing and dancing bears from The Country Bear Jamboree, which frankly I’m not really much of a fan of, but still … definitely bears!

And you’ve even got Duffy the Disney Bear, our resident bizarre teddy bear import from Tokyo Disneyland who I’m even more not a fan of … I think I’d probably sit through a dozen showings of The Country Bear Jamboree before you’d ever catch me handing Duffy over to a gift shop cashier with the instructions that “he doesn’t need to be gift-wrapped because I’d like to carry him home myself!” 😯

Oh yeah, and did I also mention the ACTUAL black bear that was apparently wandering around Port Orleans Riverside during one of my visits a while back?!?!?!

Now admittedly I don’t claim to know a lot about black bears, but I can tell you that of all the furry, woodland creatures that I wouldn’t mind being officially notified that they’ve recently been seen scampering through the wilderness near my hotel room, black bears are definitely not at the preferable end of that particular spectrum! I found it kind of comical that the notice regarded Florida black bears as a “protected species” because not for nothing, but if the two of us were to meet, I’m pretty sure that if anything I’d be the one in need of “protection,” not him…

I can just see it now – maybe I’m lounging in the hot tub, just minding my own business and not really paying attention to my surroundings, when along comes a black bear and wham! Black bear gnaws off my face.

Or maybe I’m walking back from the Riverside Mill with a fresh pepperoni pizza for dinner … black bear steals my pizza and leaves me with no other options but a $4 Snickers bar from the vending machine for my late night snack.

Or even worse of all, maybe I’m walking through the parking lot and stop to chuckle at one of those Stork Parking signs – which I’m wont to do because I find them amusing – and suddenly a black bear comes along and isn’t amused in the slightest, and consequently ends up suing me for sexual harassment.

I’m telling you – there’s really no good way that an encounter with a black bear can go down, and it’s probably only a teensy bit melodramatic to say that I was completely mortified by the prospect of running into one of these 300 pound killing machines during the course of our stay. Sure, they say that you can’t live your life in fear, however in this case I think I would have to counter, you also can’t live your life inside of a black bear’s stomach, either!

So let this be a lesson to you, anyone who finds themselves with a weakness for the cute and cuddly – know that while most bears that you’ll encounter around Walt Disney World are in fact perfectly harmless, save for perhaps the occasional bad pun or 16-minute, animatronic variety show, there are still a reserved few who are decidedly less than friendly and should you for whatever reason opt to offer them some hunny or even a banana cream pie, it’s probably safe to say that you won’t find yourself riding it’s a small world again anytime soon…

…I mean, feel free to sing the tune yourself if you want to, but just remember that the acoustics inside of a black bear’s stomach are horrible…  🙄