Admittedly I’ve never been a big fan of those giant turkey legs that you can buy around the parks.

To be fair, I don’t think I’ve ever actually had one myself, but just the general concept of walking around while chowing down on a ginormous meat stick seems a bit too … Medieval Times-y for me. And nothing against Medieval Times, mind you – it’s just that here at Disney World, forks and cutlery are in grand abundance at each of the four parks, so I simply see no need to slip back to the times when everything had to be consumed by our bare hands, to be washed down with a pint of mead and a fight to the death – that’s all! 🙂

Of course that said, it’s recently come to my attention that apparently the almighty turkey leg is rising up to take over Walt Disney World in a big, meaty way. Last month I happened across a special brand of Turkey Leg-Shaped Rice Krispie Treats while on my hunt for dessert-oriented sustenance over at the Studios, and then just a couple of weeks ago I even came across Turkey Leg T-Shirts of varying designs and colors, too! And while I might not be too eager to jump on the meat bandwagon myself anytime soon, I can still certainly recognize a trend when I see one and frankly, my friends, I think that it’s pretty safe to say that with this kind of demand, the Mouse has a lot more turkey leg slated for our collective futures here in this vacation kingdom of theirs…

But don’t let your guard down, though – that’s only the beginning! 😯

Before long plans will be revealed that those new articulated buses that Disney is planning to increase the capacity of its fleet while reducing wheels on the road … each bus will be meticulously designed to resemble giant turkey legs.

Now that Disney’s Art of Animation Resort is ready to start opening its doors, perhaps it’s time to start looking at the next hotel offering to grace the Disney collection, and you know, nothing says luxury and style like Disney’s Turkey Leg Resort & Spa. As they say at the food court, “Come hungry, leave really really sick of turkey…”

And I’ve saved the most impressive option for last! A new turkey leg-themed attraction? Think bigger. Perhaps a dazzling Turkey Leg Electrical Parade to take over for the current parade at the Magic Kingdom?? Think bigger! Seriously – what’s the one thing that us Disney fanatics are always antsy about, even though the likelihood of it happening anytime soon are pretty much slim to none???

A turkey leg-themed monorail (aka Turkeyrail) expansion to connect the entire resort?! No, no – but I like the way you think… 😉

Although then again, perhaps a deliciously themed meaty monorail would be the perfect mode of transportation for getting guests to Walt Disney World’s 5th Theme Park – TurkeyLegCot!!!

And what a truly wondrous sight it would be … little kids lining up to get their pictures taken with Timmy the Talking Turkey Leg, teens racing to be the next ones to ride Big Gobbler Mountain, and of course, no day at TurkeyLegCot is complete without sticking around for Succulence in the Sky, a dramatic telling of how these coveted treats first got their start in Disney’s theme parks, as illustrated by hundreds of delicious-looking fireworks and narrated by none other than Remy, Linguini, and Chef Gusteau from the Pixar animated favorite, Ratatouille! 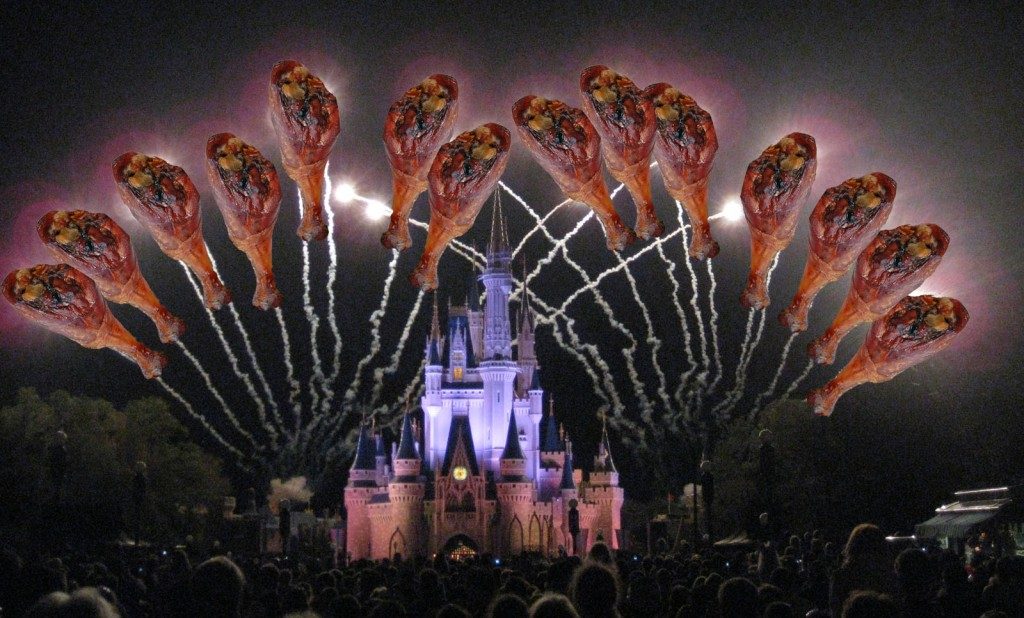 The way I see it, we’ve got two options, really – we can either put our feet down, say “That’s ridiculous!” and refuse to partake in anymore of their turkey-legged nonsense … or we can admit that the aromas do smell intriguing when we pass by those snack carts randomly stationed throughout the parks, and reach out an oversized, white-gloved hand in friendship to welcome our new carnivorous overlords like the proud, but underrated snack options that they very well might be!

On second thought, don’t wear the white gloves when you do it, but nonetheless, if I’m going to be pledging my allegiance to them eventually anyways, maybe I need to try one of these meaty sceptres for myself after all…  🙄